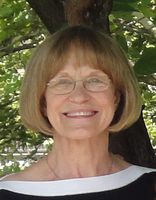 On Tuesday, October 27, 2020, Jeanette Patricia Shady, 73, passed from the loving arms of her family into the Arms of God, after a six-week battle with liver and bile duct cancer. She is survived by, and will continue to live in the hearts of her daughter, Sarah Ridenour; stepdaughter, Sheryl Ridenour; sister, Lorraine Pruitt; sister-in-law, Donna Shady; sister-in-law, Mary Ridenour Dietz (Robert, deceased), and many nieces, nephews, cousins, devoted friends, and neighbors. She was predeceased by her husband, George Ridenour; her brother, Robert Shady; her parents, Steve and Frances (Slozenski) Shady, and by her parents-in-law, Layel and Nan Ridenour. Jeanette was an immensely proud Mom; she loved Sarah fiercely. She delighted in attending Sarah's musical concerts and sporting events, and fervently supported her higher educational aims. Jeanette recovered from a tumultuous year-long battle with breast cancer 20 years ago, in order to fulfill the self-set goal to take Sarah on a cruise that included Rome, Italy, a city she longed to share with her, and Vatican City. Traveling with Sarah and George was a highlight to her years. Whether it was riding rollercoasters at Hersheypark, attending copious live music events, exploring parks to enjoy the natural beauty, traveling to NYC for plays and musicals, or skiing in the Sierras of California, she celebrated every moment. As the daughter of first generation Polish parents, a trip to Poland with Sarah was planned for 2020. Jeanette married a zest for life with a devout spirituality; those two traits defined her. While steeped in Catholicism, she was open to other faiths, including Eastern spirituality and George's Protestant beliefs. Jeanette was passionate about music and offering music to others as part of her spiritual life. She was a cantor, chorister, and half of an active duo with George. Her celestial soprano graced many sanctuaries, from her childhood parish at St. Francis in Catatonk, NY, Blessed Sacrament in Washington, D.C., to Immaculate Conception in Ithaca, where she directed the Children's Choir. During her later years, she continued in service to her faith community through active involvement with the Ithaca Peace Festival at St. Catherine of Sienna and on the advisory council for the Ithaca College Catholic Community (her daughter's friend-filled, spiritual home while she attended IC). She also shone during many impromptu performances during special occasions and everyday get-togethers. Appreciating all that life has to offer, she cherished holidays, creating moments and memories both spiritual and secular. George's death three years ago was a devastating loss to Jeanette. She honored him by focusing on her life, traveling with Sarah, learning how to grow the gorgeous dahlias for which George was well-known, and mastering the maintenance of the backyard pool. She provided guidance and support to create a garden in George's memory at his chosen First Congregational Church of Ithaca. With a generous heart, she preserved the Ridenour family's legacy of philanthropy and continued George's passion for charitable giving. Jeanette was born in Johnson City, NY, and grew up on the family dairy farm on Catatonk Hill in Candor, NY. She graduated from Candor Central School, received her B.S. from the State University of New York at Geneseo and completed academic study toward an M.S. in Rhetoric and Public Address there as well. Her first career, which revolved around professional career development, began at Cornell University in 1972. She became Director of Placement at the School of Industrial and Labor Relations, and then moved to the same position at the University's Johnson Graduate School of Management in 1975. In 1979, when she married George and they moved to Washington, D.C., she became Administrator of Professional Recruitment at Hogan & Hartson. She then continued her career services work at the Catholic University of America School of Law and George Washington University National Law Center. In 1987, she returned to Cornell for a second career dedicated to the University itself. She became Director of University Events and Liaison to the Office of the President. Later, she joined the University's Development Office as Director of Parents Giving. In her final career, starting in 2000 as Director of External Communications and Administration at Kionix, she was one of the early and longest-time employees. During her tenure at Cornell University in University Events, Jeanette guided numerous dignitaries, including Secretary Hillary Rodham Clinton, President Lee Teng-hui of Taiwan, and the Dalai Lama of Tibet. She later noted that her 15 minutes in private audience with the Dalai Lama was the most significant spiritual encounter of her life. Jeanette was honored upon her departure from Cornell with a particularly memorable citation that encapsulates so much about her. It states, in part: "Gracious, unflappable orchestrator of public ceremonies and world-class events…determined and wise in pursuit of impeccable order, good sport and intrepid trouper, who can always be counted on for a song, a dance, a laugh, or five copies of a briefing. Volunteer manager extraordinaire, our special, cheerful, larger-than-life comrade, who advised, counseled and led without domination. Our creative partner, committed to family, church, and community." Compassionate, caring, considerate, creative, cheerful, conscientious and, most of all, fun-loving and loving, Jeanette will be missed by so many who have been touched by her generosity of heart over the past several decades. A memorial Mass will be celebrated on Saturday, July 23, 2022 at 10:00 a.m. at St. Catherine of Siena church, 309 Siena Drive, Ithaca, NY. The family will receive friends Friday, July 22, 2022 from 5 to 7 p.m. at the Estey, Munroe & Fahey Funeral Home, 15 Park Street, Owego, NY. In lieu of flowers, and in remembrance of Jeanette's radiance, gifts in her memory can be made to Catholic Charities of Tompkins/Tioga, supporting immigrant services and the food pantry, at https://www.catholiccharitiestt.org/programs/, the Ithaca Concert Band at http://ithacaconcertband.org/supporters, or the Find Your Light Foundation, supporting arts education, at https://fylf.org. Condolences may be made to Jeanette's family at https://emfaheyfuneralhome.com.