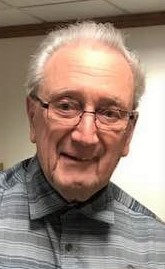 Please share a memory of Garry to include in a keepsake book for family and friends.
View Tribute Book
Garry Robert Davidson, 87, of Groton, NY passed away on September 26, 2021. He was born March 26, 1934 to Harold and Leone Davidson. Besides his parents, he was predeceased by his wife of 57 yrs, Mary Ellen Davidson; his sisters: Joyce Caden, Carol Nixon, and his brother, Wayne Davidson. He is survived by his loving children: Tom (Holly) Davidson, Tim (Paula) Davidson, Maria (Glenn) Cotterill, Pat (Berta) Davidson, Liz (Chris) Garner, 11 grateful grandchildren: Joshua, Steven, Gabriel, Nathan, Caitlyn, Justin, Bonna, Roxanne, Casey, Jacob and Jonathan; and 6 wonderful great grandchildren along with several nieces, nephews and cousins. He knew and often declared how blessed he was with his loving family. The Lord faithfully kept Garry through polio, prostate cancer and Alzheimer's. He left school early to join the Airforce, but obtained his GED, fulfilling his promise to his mother. He served in Fairbanks, Alaska. He started working for IBM along with his brother, and then met the love of his life. They moved to New Hampshire where they fostered children and had three of their own. Then they settled in Candor, NY in an old farmhouse on the hill, where their last two children were born. Their loving home was a welcoming safe haven to friends, family and neighbors alike. Jerome (Butch) Casey, father-in-law, expanded their home to accommodate the growing family. Great joy, many gatherings, celebrations and sorrows were shared openly on the hill. All children were welcomed and loved to explore the house and the property. Hide-and-seek, riding ponies, spying, playing grounders, bounders and pop flies, sledding or swimming created a lifetime of such blessed memories. Garry was part of the archery team while at IBM. He loved working with leather, listening to music, reading books, eating ice cream and he started wood carving in retirement. He worked some side jobs, then he and Mary Ellen started a cleaning business. Garry was lovingly cared for by his wife until she passed in 2015. He learned about The Memory Cafe, making fast friends with the volunteers and others with memory problems, and appreciated all this organization did for him. Within a short period, he made friends at the Elizabeth Brewster House, becoming a social butterfly and a chick magnet. He seemed to flourish thru the activities and family structure of assisted living. Though Alzheimer's is a terrible disease, Garry accepted it and tried to make the best of every day as he relied upon His Heavenly Father. He loved to socialize, talk about his family, enjoy life and reminisce about his time in Alaska, his family and being with Grandpa Mike on the farm. Garry never met a stranger. He was loved by everyone that met him and positively impacted their life in some way. He will be greatly missed by those that had the opportunity to know and love him. Family will receive friends on Friday, October 8, 2021 from 2:00 pm to 2:45 pm at Reach Out For Christ Church, 318 Johnson Rd, Freeville, NY 13068. A memorial service will follow at 3:00 pm at the church. Condolences may be made to Garry's family at www.emfaheyfuneralhome.com.
To send flowers to the family or plant a tree in memory of Garry Davidson, please visit Tribute Store
Friday
8
October

Share Your Memory of
Garry
Upload Your Memory View All Memories
Be the first to upload a memory!
Share A Memory
Send Flowers