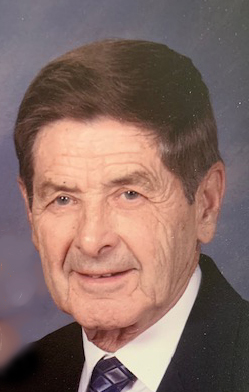 Thomas F. Doty, 86, of Owego, NY went to be with the Lord on Thursday, April 9, 2020. Tom was born on February 4, 1934 in Endicott, NY to parents J. Donald Doty and Margaret (Waters) Doty. Tom grew up in Owego and graduated from Owego Free Academy in 1951. Tom was a sharp student and excelled at sports including baseball and basketball. Tom attended and graduated from Alfred University in 1958 earning a degree in Economics and Business. Tom was a member of the Delta Sigma Phi National Fraternity. He also served in the United States Marine Corps, 3 years active service, achieving a rank of Corporal. His decorations included the National Defense Service Medal, Korean Service Medal, United Nations Service Medal, Good Conduct Service Medal and he received an honorable discharge in 1961. Tom was married to his loving and devoted wife, Jane Doty in 1959. Together, Tom and Jane became pillars of their community in the Town of Owego, Tioga County and beyond, substantially contributing to enhancing the quality of life of everyone they served – which is how they will be remembered by many. Tom was a distinguished citizen and professional. His exemplary life was marked by a commitment to service, devotion to family and friends, a strong faith, civic engagement and ensuring the welfare of his community. Tom spent his professional career over more than 40 years at Security Mutual Life Insurance Company where he retired as Vice President of Claims. Tom was also extremely active in both his public and faith life. He served on the Village Board and then as the Supervisor for the Town of Owego for over 20 years and during his term as Town Supervisor, he founded the Owego Town Hall. Additionally, he was the President of the New York State Association of Towns and Chairman of the Republican Party of Tioga County. Later, he would be appointed to and serve as a Board of Trustees Member for Binghamton University. Tom also established the Jane Doty OFA Memorial Scholarship in loving memory of his wife; and he was elected to the OFA Hall of Fame. Tom was a devout man of faith and, alongside his wife, was a very engaged member of St. Patrick's Church of Owego where he was a Eucharistic Minister, Lay Lector and participated in Marriage Encounter, Cursillo, and Life in the Spirit. Tom was also a strong supporter of Tioga Rural Ministries. Tom was also known by many as an avid sports fan and could often be found at the ballpark taking in a baseball game or cheering for his favorite team the Syracuse Orange. In his youth he travelled the country and as an active service member saw many corners of the globe. He tremendously enjoyed spending time with his family, and especially with his wife Jane in Jupiter Florida where they spent many winters together. Tom had an infectiously positive presence and carried himself with candor and integrity. He was ceaselessly laughing and joking, and was always seemingly more than content to be wherever he was at any given moment. Tom will be remembered by his family most for his unbounding sense of humor, thoughtful good nature, authenticism, and his steadfast and supporting ways. He is greatly missed by his adoring grandchildren who hold many of their fondest childhood memories of time spent with Grandpa. Tom leaves behind a legacy which will long endure the passage of time and will remain as a comforting memory to all he served and befriended. Tom was predeceased by his parents, J. Donald Doty and Margaret (Waters) Doty; his loving wife of 54 years, Jane Doty with whom he is now reunited in heaven; two brothers, Louis and Joseph Doty. He is survived by his three children and their spouses, Stephen and Laurie Doty, Susan and Steven Murphy, Thomas and Kristine Doty; five grandchildren, Matthew Murphy, Meghan (Tim) Mahoney, Jillian (Jordan) Darling, Kaitlyn (Daniel) Adler, Evan Doty; great-grandsons, Olin Thomas Mahoney and Maddox Darling; brother and sister-in-law, Mark and Alicia Doty; sister and brother-in-law, Elizabeth and Alan Bush; several nieces, nephews, cousins and special friend, Joyce Jackman. The family would like to thank Willow Point Nursing Home in Vestal, NY for caring for Tom during his final days. Public services to remember Tom, honor his legacy and celebrate his life will be held in Owego, NY on Saturday, September 11, 2021. A Christian Mass will take place in Tom's honor at St. Patrick's Church at 10:00 AM and will be followed by a graveside memorial service with military honors at St. Patrick's Cemetery. The family is being assisted by the Estey, Munroe & Fahey Funeral Home. Condolences may be made to Tom's family at www.emfaheyfuneralhome.com.
To send flowers to the family or plant a tree in memory of Thomas Doty, please visit Tribute Store
Saturday
11
September